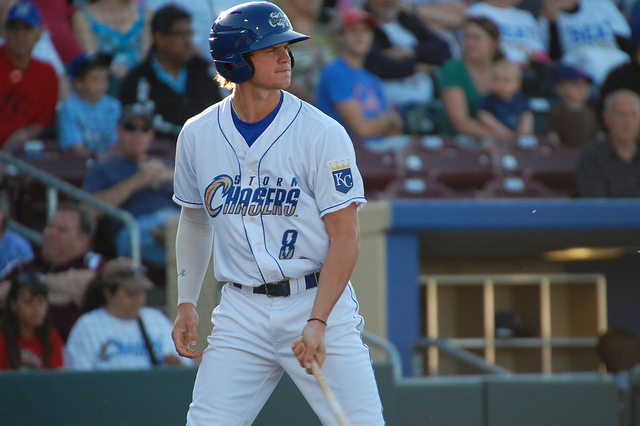 Wil Myers visited Tropicana Field in St. Petersburg Florida for the first time as a member of the Tampa Bay Rays organization. Myers was acquired in the trade with the Kansas City Royals that sent  Tampa Bay right-handers James Shields and Wade Davis to Kansas City for Myers,  right-hander Jake Odorizzi, left-hander Mike Montgomery and third baseman Patrick Leonard. The anticipation of Myer’s arrival at the Trop was preceded by the expectation of Tampa Bay fans. Myers is attending the Rays’ annual Winter Development Camp that features the organization’s top prospects.

For his part Myers seems ready and willing to assume his position in the Rays outfield.  Myers hit .314/.387/.600 batting line with 37 homers between Double-A and Triple-A in the Royals organization, numbers that would suggest he is ready for his call to the big leagues.

“It’s every person’s dream to be in the big leagues, so obviously that is my ultimate goal,” Myers said. “Every ballplayer has confidence that they’re ready for the Major League level, but that’s not my decision. That’s for the front office. I’m really looking forward to the opportunity.”

Rays executive vice president of baseball operations Andrew Friedman says for the record he doesn’t know where Myers will begin the season. Tampa Bay has yet to complete its 2013 roster. The Rays reportedly are looking to add another bat to the lineup. “You can’t simulate being around a guy, watching him prepare, watching the way he goes about things and how he fits into the Rays’ way of doing things,” Friedman said.

If history suggest anything to Rays to fans the 22-year-old Myers may be ticketed for a short stint at Triple-A Durham. The Rays need an opportunity to watch Myers work within their organization. Essentially Myers will have to prove himself worthy of a spot on the 25 man roster. Long gone are the days when Tampa Bay hurried prospects along. “I think one of the biggest benefits of what’s happened over the last five years is that we haven’t had to look at prospects and say, ‘OK, when are they going to be ready? Let’s count down the days until 2015, when they’re ready,'” Friedman said.

The Rays were a 90 win team last season, and although they may be young, the Rays expect to contend in the American League East. Manager Joe Maddon has his own idea, “I’m more interested not in that he’s going to hit 30 homers, I’m more interested in what people think of him and how he answers question and I’m trying to determine what makes this guy tick,” Maddon said.

You will know rather quickly what the Rays of Myers. Tampa Bay has a history of extending young players the first team-friendly contract. “I just try to stay away from it. I just want to go out and do my job, and just try to get better every day,” Myers said. That sounds like the patient part.