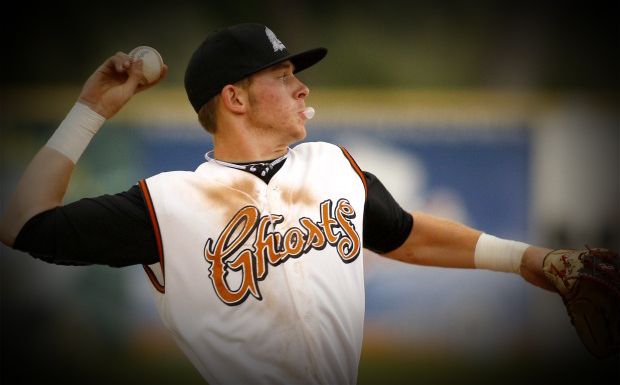 Catcher Wilin Rosario, and infielders Jordan Pacheco and Josh Rutledge, were rookies  who logged respectable Major League debuts for the Colorado Rockies in 2012. Unfortunately for the Rockies, none of the aforementioned players are starting pitchers, and neither are the top three prospects in their organization. Since Coors Field is not exactly “mile high” on the list of preferred destinations for difference-making free agent starters, the Rockies desperately need to develop their own rotation arms so they remain under long-term team control.

Drew Pomeranz, the highly regarded left-hander acquired from Cleveland in the Ubaldo Jimenez trade in 2011, has yet to consistently impress at the Major League level. Jhoulys Chacin, a product of the Rockies farm system, struggled through an injury-interrupted 2012 campaign but logged impressive ERAs (3.28 and 3.62) the two previous seasons. He is healthy again, and so is Jorge De La Rosa.

Colorado needs the aforementioned three arms to deliver in 2013 because there is little help in the minors considering that shortstop Trevor Story, outfielder David Dahl and third baseman Nolan Arenado are its top three prospects, and left-handers Tyler Matzek and Tyler Anderson pitched at the Single-A level in 2012.

Here are the top 10 prospects in the Rockies farm system entering the 2013 season:

1)Trevor Story was chosen by the Colorado Rockies in the supplemental round (45th overall) of the 2011 draft out of high school. The all-around player hit .367/,505/.872 with 18 home runs, 63 RBI, 43 doubles, six triples and 15 stolen bases Not bad for his first pro season. The 20-year-old Story is expected to climb the Rockies farm system swiftly, perhaps leading to a trade of Troy Tulowitzski.

2)David Dahl was Colorado’s first-round draft pick in 2012. The team was so high on the outfielder that they gave him a $2.6 million signing bonus out of high school. A left-handed hitter with plus speed and a strong throwing arm, the 18-year-old Dahl smoked Pioneer League pitching with a .379 average, a 1.048 OPS and 10 triples last season.

3)Nolan Arenado could join Story in the Rockies infield. The second round pick in 2009 led the minors with 122 RBI in Single-A in 2011 but slipped to 56 RBI last year at Double-A Tulsa. A third baseman, the 21-year-old Arenado remains a top prospect, though, and hit .285 in 2012 and projects to hit for average as well as generate runs.

4)Tyler Matzek was a first round pick (11th overall) out of high school in 2009 and boasts a power arm that struck out 153 in 142.1 innings at advanced Single-A Modesto last year. The reason such a live arm that has three plus pitches (fast ball, curve ball and change-up) remains has not progressed past Single-A in three minor league seasons? A severe lack of command. He walked six batters per nine innings last year and has walked 6.9 per nine innings over his pro career.

5)Kyle Parker was a quarterback at Clemson University, and he was also a power-hitting outfielder. Though he is strike out prone, he is a run producer and swatted 23 home runs in 390 at-bats at Modesto last season. A first round pick (26th overall) in 2010, the 23-year-old Parker projects as a right fielder with his strong arm.

6)Tyler Anderson is a 23-year-old left-hander who was a first round pick (20th overall) out of the University of Oregon in 2011. Boasting strong command, he has four offerings, including a low 90s heater with movement, a change-up that also has movement along with a curve ball and slider. He posted a 2.47 ERA and a 1.08 WHIP at low Single-A Asheville in 2012, limiting hitters to a .232 average.

7)Will Swanner is a right-handed hitting catcher who hits for average and power, as his .302 mark, 16 home runs, 61 RBI and .915 OPS at Asheville last season indicate. His bat is ahead of his defense behind the plate, so he is still raw, but as long as he becomes at least adequate at catcher, his bat will carry him.

8)Rafael Ortega is a 21-year-old Venezuela native who is a plus defensive center fielder with speed. He hit .283, legged out eight triples and stole 36 bases at Modesto last season.

9)Edwar Cabrera is a 25-year-old left-hander with a live arm. He struck out 121 in 129.2 innings between Double-A and Triple-A last season, holding hitters to a .195 average and posting a 0.97 WHIP. He was rocked in two starts with the Rockies, serving up three home runs in 5.2 innings, walking seven and logging a gaudy 11.12 WHIP.

10)Chad Bettis was a highly regarded second round pick out of Texas Tech in 2010, and he recorded a 2.70 WHIP and a 1.09 ERA in his first two minor league seasons. Last year, he was slated to make his Double-A debut but missed the season with a shoulder injury. If his return to full health, the 23-year-old right-hander could be a viable starting pitching prospect for the Rockies.