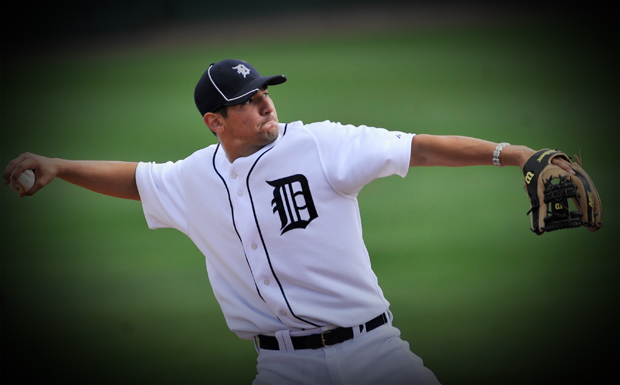 With Miguel Cabrera, Prince Fielder, Justin Verlander and Anibal Sanchez representing more than half of their 2013 payroll – and Victor Martinez and Torii Hunter getting eight-figure salaries as well – the Detroit Tigers could use some homegrown help to fill other spots in the lineup and on the pitching staff.

Aside from outfielder Avisail Garcia, who made his Major League debut last year (.319 in 47 at-bats) and converted outfielder Nick Castellanos (who is one of the top prospects in baseball), the Tigers farm system has little to offer in terms of promising position players and future rotation arms.

That the Tigers have surrendered their last three first round draft picks (for signing free agents Jose Valverde, Victor Martinez and Prince Fielder) has not helped the state of their minor league clubs, and they traded top pitching prospect Jacob Turner to Miami last summer to get Sanchez and second baseman Omar Infante.

Here are the top 10 prospects in the Tigers farm system entering the 2013 season:

A supplemental first rounder out of high school in 2010, Castellanos was originally a third baseman. He was transitioned to right field last year because of Cabrera’s long-term presence at third base. Tigers legend Al Kaline has worked with the 20-year-old right-handed hitter on the intricacies of playing right field. Castellanos was the Futures Game MVP last summer, and split the season between advanced Single-A Lakeland (where he hit .405 in 215 at-bats) and Double-A Erie.

Signed as an international free agent from Venezuela in 2007, Garcia is still only 21 and opened eyes with an impressive Major League debut while helping the Tigers capture the American League Central title, hitting .319 in 47 at-bats. Featuring a mix of power and speed – he swatted 14 home runs and stole 23 bases between Lakeland and Erie last year – Garcia is still developing his power potential. He will compete for the Tigers’ starting left field job in spring training.

With Valverde gone via free agency, the Tigers could turn the closer’s role over to Rondon, a 6-foot-3, 265-pound right-hander whose fast ball reaches 100. The 22-year-old Rondon sometimes struggles to throw strikes, but when he does hitters have a tough time putting the ball in play. Between three minor league levels last year, he limited hitters to a .172 average and struck out 66 in 53 innings while earning 29 saves.

A second round pick out of high school in 2012, the 18-year-old Thompson is a big and strong Texan with a live fast ball and a plus slider and change-up. He logged a 1.91 ERA, a 0.85 WHIP and a .149 opponent’s batting average in eight starts for the Gulf Coast League Tigers last summer

A third round selection out of high school last summer, the right-handed hitting Schotts was moved from shortstop to the outfield after he signed and had a solid pro debut season, hitting .310 with 15 stolen bases in 155 at-bats for the Gulf Coast League Tigers.

The 21-year-old Venezuela native hits for average and uses his line drive hitting and speed to leg out doubles and triples. A versatile middle infielder who can play shortstop and second base, Suarez is defensively adequate.

The 19-year-old Venezuelan struggled in his first stint at low Single-A, hitting .162 in 99 at-bats before he was shipped to the New York-Penn League, where he was more comfortable and batted 311 in 289 at-bats. He is still developing at the plate, but the Tigers believe the left-handed hitter has power potential and thnk it will show as he gets stronger.

The left-handed hitting Baylor University product has a .296 average and a .826 OPS in three minor league seasons. He stole 20 bases at Lakeland last season and batted .290, but he has yet to show power (seven home runs in 473 at-bats) that he will need to play a corner outfield position. Collins does have power potential, though, and he has a chance to emerge as a run producer.

The 24-year-old Crosby was a highly regarded prospect in the Tigers organization before undergoing Tommy John surgery. Over the last two seasons, his numbers have been adequate, but his strikeouts per nine innings have decreased. His plus fast ball induces a lot of ground balls, and Crosby also features a curve ball and change-up. He posted a 9.49 in three starts last year in his Major League debut.

The 25-year-old Wilk has recorded respectable numbers over four seasons in the Tigers farm system, including a 2.66 ERA and a 1.02 WHIP. In 42 starts at Triple-A Toledo over the last two seasons, he has a 2.96 ERA and has kept hitters off-balance with his finesse offerings. He also has exceptional command, but his success has not translated to the majors, where he has a 6.66 ERA and a 1.68 WHIP, and has served up 35 hits in 24.1 innings in eight games, including three starts.