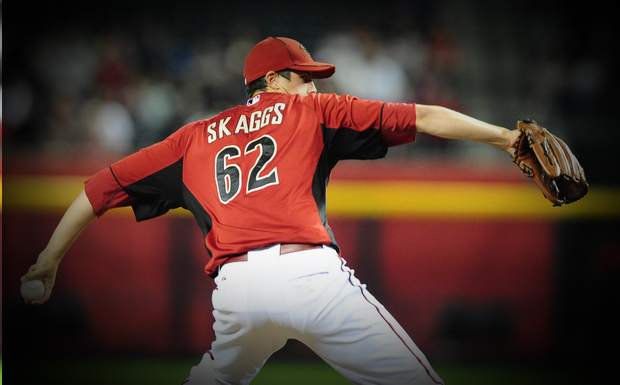 The Diamondbacks boast a deep and talented rotation that includes Ian Kennedy, Trevor Cahill, Brandon McCarthy and Daniel Hudson along with homegrown arms like Wade Miley and Patrick Corbin.

The depth continues at the minor league level with highly regarded starting pitching prospects like Tyler Skaggs and Archie Bradley. The bounty of pitching allowed general manager Kevin Towers to include top prospect Trevor Bauer in the three-team trade that brought young shortstop Didi Gregorious to the desert.

The Diamondbacks also have an array of talented outfielders at the Major League and Minor League levels, which could lead to the club dealing Justin Upton or Jason Kubel. Names at Triple-A like Adam Eaton and A.J. Pollock make Towers feel comfortable about dipping into the outfield surplus to bolster other areas of need.

Here are the top 10 prospects in the Diamondbacks system entering the 2013 season:

Ranked sixth on the recently released Baseball News Source Top 10 Prospects List for the 2013 campaign, the 21-year-old left-hander had an eventful 2012 season that saw him post a 2.87 ERA, a 1.22 WHIP and a .246 batting average against in 22 starts between Double-A Mobile and Triple-A Reno. He also made his Major League debut, posting a 1-3 record with a 5.83 ERA and a 1.47 WHIP in six starts.  The supplemental first round pick of the Angels in 2009 who was shipped to Arizona in the Dan Haren trade had three above-average pitches and has top of the rotation potential.

The seventh overall pick out of high school in 2011, Bradley is a 20-year-old right-hander who has three above-average pitches. A pure athlete – he was a three-sport standout in high school – Bradley hails from the same state (Oklahoma) and the same draft as Dylan Bundy. Though Arizona is rich with pitching, Bradley has a chance to rapidly climb the organizational ladder. He was 12-6 with a 3.84 ERA,  a 1.26 WHIP and 152 strikeouts in 136 innings over 27 starts at Single-A South Bend last season.

Chris Johnson is a young veteran slugger who the Diamondbacks acquired from Houston last season. He would have trade value if Arizona decides to summon the 21-year-old Davidson, who was the club’s first round pick (35th overall) in the 2009 draft. A potential middle of the order bat at the Major League level, Davidson hit .261 with 23 home runs, 76 RBI and a .836 OPS last year at Double-A Mobile.

Since the Diamondbacks dealt Stephen Drew to Oakland last summer, they have seen a void at shortstop. The club acquired Cliff Pennington, and then it landed the 22-year-old Gregorius from Cincinnati in the three-team trade that send Shin-Soo Choo to the Reds and the aforementioned Bauer to Cleveland. In 2012, the athletic Curacoa native climbed from Double-A to Triple-A and then made his Major League debut with the Reds, for which he was 6-for-20 (.300) in eight games. The left-handed hitter is effective with the bat and has good range and a strong arm in the field.

A supplemental first rounder (43rd overall) in 2011 out of Kent State University, the 22-year-old Chafin is a power left-hander who will likely shift to a late-inning relief role as he climbs the Diamondbacks system. He struck out 150 batters in 122.1 innings but logged a 4.93 ERA and a 1.48 WHIP at advanced Single-A Visalia in 2012.

Proficient in the field and at the plate, the 21-year-old Owings has the potential to become a solid everyday shortstop at the Major League level. Since the Diamondbacks have brought in Pennington and Gregorius, they can let Owings cultivate those skills. He hit .290 with 17 home runs, 52 RBI, 12 stolen bases and five triples between Single-A and Double-A in 2012.

A first round draft pick (26th overall) out of high school last year, the 18-year-old Trahan could remain behind the plate if he shows improvement, but his athleticism and strong arm would allow him to play right field. The Diamondbacks like Trahan’s significant power potential. He hit .281 with five home runs, 25 RBI and a .895 OPS in 167 at-bats in rookie league ball in 2012. He also had eight steals and three triples, and runs well.

A first round pick (17th overall) out of Notre Dame in 2009, the 25-year-old Pollock missed the 2010 season with a fractured elbow but has rebounded impressively at Double-A Reno and last year at Triple-A Tucson (where he hit .318 with three home runs, 52 RBI and 21 stolen bases). A player who possesses tremendous baseball instincts, Pollock has the potential to develop more power, and he can hit for average and swipe bases. He hit .247 in 81 at-bats last year in his Major League debut.

A left-handed hitting catcher drafted in the fifth round out of Puerto Rico in 2011, the 20-year-old Perez drew attention last year with his performance at Missoula in the Pioneer League. Raw behind the plate, he hit .293 with a .900 OPS 10 home runs and 60 RBI in 225 at-bats. Trahan and Perez give the Diamondbacks some depth at a premium position, though both prospects are early in their development stages – especially behind the plate.