Upton, Kubel: Which Outfielder Should the Diamondbacks Trade? 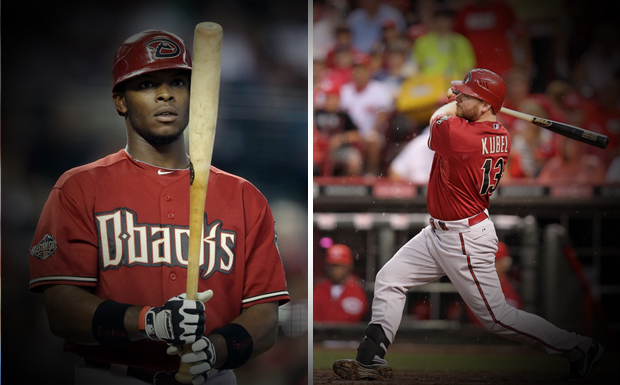 There have been a lot of rumors surrounding the Arizona Diamondbacks and their outfield depth. Especially now with the recent, [extremely] surprising signing of Cody Ross, the Snakes legitimately have five starting-caliber outfielders.

While a case could be made for trading any one of Justin Upton, Adam Eaton, Jason Kubel, or Gerardo Parra, one must seriously consider whether the prospective return for these players would actually help the future of the franchise, or hurt it.

So far, the 25 year-old Upton has had a terrific, young career–and is in position to be a legitimate stud for years to come.

The real issue here is whether a prospective return for Justin Upton would actually be more fruitful for the Diamondback’s future than just keeping Upton himself.

Keep in mind, the Diamondbacks don’t exactly have a weak farm system–thus dealing Upton, who is still very young, for even a unanimously big, yet still “unpredictable” haul, might not be prudent.

Aside from Upton, the Diamondbacks are currently set at the Major League level at catcher (Miguel Montero), first base (Paul Goldschmidt), and four-fifths of their rotation (Ian Kennedy, Wade Miley, Tyler Skaggs, Patrick Corbin), and have the likes of Archie Bradley (starting pitcher), Adam Eaton (center field), Matt Davidson (third base), David Holmberg (starting pitcher), Stryker Trahan (catcher or outfield), and Didi Gregorius (shortstop) coming up through the farm.

One has to think that an open market Justin Upton could fetch upwards of $25 million per season–so is that type of commodity really worth a package centered around Mike Olt?

Eaton garnered 103 PA’s in the Majors last season for the Diamondbacks, and exhibited a small taste of his potential: .259/.382/.412 line with 2 HR, 5 RBI, 19 R, and 2 SB. But just in case 103 PA’s is too small of a sample size for you, the 24 year-old outfielder has also enjoyed a fruitful–and borderline incredible–Minor League career.

Eaton isn’t near the type of player Justin Upton is, but then again, speedy center fielders (98 career SB in Minors) who draw walks (career 11.4% BB% in Minors), and play plus defense don’t grow on trees either.

The outfielder is certainly worthy of a starting role, but given his lack of Major League experience, and age as a prospect, prospective suitors might not break the bank on him enough to warrant a trade.

And unless the Diamondbacks make a play for Michael Bourn via free-agency, it might be worth giving Eaton a full-time chance to play center field.

When the off-season was still young, one of the most in-demand positions was center field. Given the dearth of the center fielder pool, teams handed out eye-popping contracts to Angel Pagan, B.J. Upton, and Shane Victorino, and others traded the farm for Ben Revere and Denard Span.

But now, it appears as though all mid-to-big market teams are set with their center fielders–even though Michael Bourn, who posted a 6.0 WAR last season, still remains a free-agent.

Needless to say, if it’s between signing Michael Bourn and trading for Gerardo Parra, one has to think that a contending team will side with the guy who’s averaged a 4.8 WAR over the past four seasons.

The outfielder has never truly been given a real shot as a starter by the Diamondbacks, even though General Manager Kevin Towers believes Parra is deserving.

Even if that might be the case, unlike Eaton, Parra’s low offensive ceiling doesn’t really make him a lucrative target for hypothetically center fielder-deprived teams.

Only five left fielders in baseball socked more homeruns than Kubel, and just six drove-in more RBI. Yet, despite these impressive feats, Jason Kubel still, technically, had a sub-par 2012.

But, Kubel could still provide value to several American League clubs. The slugger’s appropriate $7.5 million contract in 2013 (and $1 million buyout in 2014) hardly makes him an albatross, like the outwardly available Vernon Wells and Alfonso Soriano, for instance.

In fact, there are several AL teams that could instantly improve their designated hitter situation with the addition of Kubel.

The most obvious team would be the New York Yankees. With Alex Rodriguez currently on the disabled list to until at least June, the currently slotted designated hitter for the Bombers is Eduardo Nunez.

The proposed trade makes sense for the Yankees even if/when Rodriguez returns from the DL, as the future Hall of Famer struggled against his own kind in 2012, posting a pathetic .256/.326/.391 line in 356 PA’s.

In terms of compensation, the Yankees have one of the deepest farm systems in baseball, so almost anyone on their top twenty list would be a good return for one year of Jason Kubel.