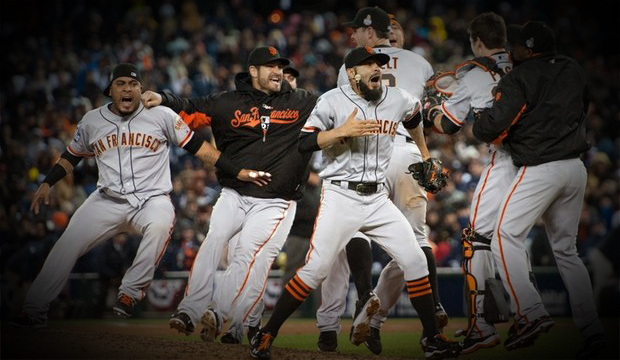 If you are a regular reader of Baseball News Source – and I hope that you ARE – you may have noticed there has not been many articles published about the World Champions of 2012, the San Francisco Giants.

You may have seen articles for the 2013 Pittsburgh Pirates and the future of the New York Yankees, but nothing from the Champs.

Truth be told, I’m still on a chocolate high from winning our second Championship in the past three years.

I observed the Winter Meetings and all the high-market trades that came about during that week.

There wasn’t even a reason to pay attention, because it was obvious that the Giants were NOT going to be players during the meeting.

Instead, we took our time to sign who we already had and also brought back a “one hit wonder” from 2010 in Andres Torres.

Torres signed for approximately $2 million – the equivalent of a ham and cheese sandwich for MLB veterans.

Angel Pagan was signed to a four-year, $40 million deal to roam centerfield at AT&T Park and “Blockbuster” Marco Scutaro was re-signed for three years – even though he will be over 40 at the end of the contract.

Jeremy Affeldt finally got an offer for more than a year, signing on with the Giants for three additional years and Santiago Casilla was also signed for three years.

Well, that’s about it.  NOW do you wonder why more hasn’t been written about our off-season?  There was nothing to SAY about it.

The Dodgers have upgraded at every level and even the D’Backs made some big moves to improve.

The Padres have gotten younger and have stockpiled talent for years to come.

Can the Giants POSSIBLY compete in an already tough NL West?

The Giants have been blessed with an amazingly healthy starting five of Matt Cain, Madison Bumgarner, Ryan Vogelsong, Tim Lincecum and Barry Zito.

These men can be relied on to step up to the mound every fifth day without fail.

If the Giants have any chance to contend, all must remain healthy and Zito needs to pick up where he left off last season.

This is also a “make or break” year for Lincecum.

Will he be the Big Time Timmy Jim of 2010 or Relief Specialist Lincecum from the 2012 playoffs and World Series?

Or worse, what if he’s neither A or B?

“The Beard” Brian Wilson is probably gone, but the Giants’ bullpen was still stellar in 2012.

Sergio Romo, Castilla, and Affeldt took turns closing and when one didn’t work out, someone else came in and did the job.

I have a feeling that Wilson may re-sign with the Giants, because is there really any other team that would be able to handle his nonsense OTHER than the Giants?

We have the best and his name is Buster Posey.

The Giants probably also have the best back-up catcher in the league in Hector Sanchez.

When Posey got his “rest” from behind the plate to play first base, Sanchez filled in admirably.

After years of “Nice Guy” catcher Eli Whiteside – he of calling a good game but could barely hit his weight – Sanchez was given his chance.

He is only 22 and was so good, the Giants were able to trade top catching prospect Tommy Joseph to seal the deal on getting Hunter Pence at last year’s trade deadline.

It looks as if the Posey/Sanchez combo will be around for some time.

First Base:  Brandon Belt needs to excel at first if he wants to remain with the team.

No longer are the Giants afforded the opportunity to bring him up from AAA and send him back down.  This is his make or break year.

Belt did get a couple of clutch hits during the playoffs and World Series, but he needs much more to be an everyday (unless Posey is there) fixture at first.

Second Base:  Scutaro just needs to be Scutaro to keep second, but Joaquin Arias is there to give him rest, when needed.

Shortstop:  Brandon Crawford is our future at shortstop, but he needs to hit for average if he wants to be locked in at short.

Once again, Arias is there to back up Crawford if he is in a prolonged slump.

Crawford’s defense is spectacular, but the Giants need bats that contribute at the bottom of the order.

Third Base:  Pablo Sandoval.  Not much more can be said that hasn’t already been said.

In summary:  Weight down, no injuries, great defense, more power, weight down.

Did I say weight down twice?

As of now, it’s Pence in right, Pagan in center and the two-headed “Monsters of No-Pop,” Torres and Gregor Blanco in left.

The Reverend Pence needs to hit as his career has shown and drive in a LOT of runs for the Giants.

Pagan had a record-setting (triples) year for the Giants and became the lead-off hitter we desperately needed.

I have no clue what Blanco/Torres will contribute, but Blanco will forever be in Giants fans hearts with “the catch” that saved Cain’s perfect game.

Let’s hope for some good defense and an occasional RBI from left field.

So to answer my own question, OF COURSE the Giants can compete in 2013.

Can they win it all?  OF COURSE they can win it all, but I wouldn’t rely on too many miracles this time around.

One thing we have going for us is that our clubhouse manager doesn’t have to change too many lockers.