Minnesota Twins’ Rotation: Has it Improved for 2013? 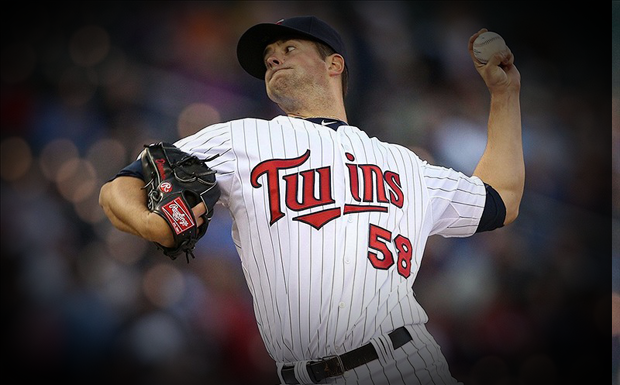 Scott Diamond is one of  two remaining starters from 2012

In 2012, the Minnesota Twins endured their second straight ninety-plus loss season. While their hitting wasn’t spectacular (combined 99 OPS+, which was slightly below league average of 100 OPS+), it was really their pitching that did them in.

The Twins pitching staff ranked second-to-last in the American League with a combined 85 ERA+. Considering the league average was a 101 ERA+, the 2012 Twins’ hurlers were pretty pathetic.

More specifically, the team only had one starting pitcher who registered a 2+ WAR (Scott Diamond posted a 2.2 WAR).

The combination of those ten pitchers amounted to -3.9 WAR.

Luckily for the Twins, the only two remaining starters from 2012 were their two top ones– Scott Diamond and Sam Deduno–and through trades and free-agent signings, the Twins have replaced their lesser pitchers with Vance Worley, Kevin Correia, Mike Pelfrey, and Rich Harden.

Even though the acquisitions have been met with a lot of criticism, compared to their 2012 staff, the 2013 Twins starters should still be slightly improved.

Worley even has potential to be more valuable than the Twins “ace” Scott Diamond due to his ability to strikeout batters.

Yes, it was just 19.6 innings, but regardless, Pelfrey was en route to his best career season in 2012 before tearing his UCL, and opting for season-ending Tommy John surgery.

It was unfortunate timing for the 28 year-old, as the former first round pick never lived up to his supposed “future rotation anchor” label.

On the surface, Big Pelf’s lack of success is a bit befuddling, as the righty throws a consistent 93 MPH fastball, and “boasts” four other pitches in his arsenal.

According to RAA (runs above average), none of his pitches are truly above league-average, the righty possesses league-average control (career 3.2 BB/9) while owning a meager 5.1 K/9 career rate, and his career 4.50 xFIP is in-line with his career 4.36 ERA.

So Pelfrey is about as predictably mediocre as it gets.

The problem with Harden isn’t talent, as the righty has posted three 3-plus WAR seasons in his career.

The only reason the former Oakland Athletics stud-prospect doesn’t have more productive seasons under his belt is due to his incredible knack for injuries.

Harden has been injured more times than Dolly Parton has had plastic surgery (I count around nine DL stints for Harden, but it could be more).

It’s difficult to ascertain as to whether the 31 year-old will be actually be a full-time asset in 2013, but even with his declining velocity, one has to think that 80 innings of Rich Harden is superior to 80 innings of Carl Pavano.

As unexciting as adding Vance Worley, Kevin Correia, Mike Pelfrey, and Rich Harden may be, their addition still marks a noticeable improvement over the cast of characters the Twins were forced to use in 2012.

Whether the Twins new rotation filled with four and five starts will make the team anything other than cellar-dwellers, is a different question altogether.