There’s Still Room for the Dodgers to Improve 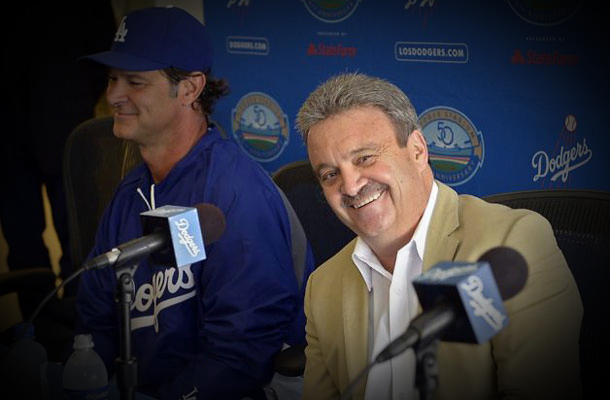 Colletti said the Dodgers are never “going to be reckless with what we do.”

Apparently no one told the Los Angeles Dodgers that other teams use a standard five-man rotation.

Yet even with eight viable starting pitchers for just five spots, and their cast of other positional All-Stars, there’s still room for the Dodgers to improve.

Even with a $215 million payroll for 2013, the Dodgers roster is still an eclectic mix of All-Stars and question marks.

Although their lineup is dominated with studs like Matt Kemp, Andre Ethier, Adrian Gonzalez, A.J. Ellis, and Hanley Ramirez, the West-Coast spenders also have Mark Ellis and Luis Cruz penciled in to start at second base and third base, respectively.

Given the caliber of the rest of their lineup, perhaps the Dodgers can set their eyes on improving at least one of their soft spots.

Improve at second base

Looking to improve their middle-infield in 2012, the Dodgers handed the 35 year-old Ellis a two-year deal last off-season–but the team could instantly upgrade over his mediocre .258/.333/.364 line with Ben Zobrist of the Tampa Bay Rays.

Having just traded “star” pitcher James Shields, the Rays have made it apparent that no one (well, perhaps Evan Longoria, who is signed through 2023) is untouchable.

The 31 year-old Zobrist has been a Major League presence since 2006, and of elite-hood since 2009. The infielder has averaged a whopping 6.625 WAR over the past four seasons, even achieving an incredible (and career-best) 8.5 WAR in 2011.

Not only does Zobrist’s rare power/speed combination make him a valuable asset at second base, but also, his pesky approach to defense completes him as a player.

In addition, Zobrist is also signed to an incredible team-friendly contract, making just $5.5 million this coming season, and another $14.5 million over the next two.

Given the Rays knack for constant farm-stocking, it’s unlikely the Dodgers would simply be able to dump any of their current, veteran pitching depth in exchange for Zobrist.

But that doesn’t mean the two teams couldn’t pair up. In fact, the Dodgers have plenty to offer the Rays prospect-crazed General Manager, Andrew Friedman.

And hey, maybe the Rays would take Ted Lilly’s $12 million contract for 2013 depending on the prospect package.

Another area of need for the Dodgers is third base

The incumbent Luis Cruz came out of nowhere for the Dodgers in 2012, and posted a .297/.322/.431 line in the latter part of the season. But the 28 year-old infielder is hardly a dependable option-especially at such a typically offense-heavy position.

Assuming Cruz’s power sinks back down to normal levels (career .394 SLG in Minor Leagues), the infielder’s only true asset is his steady defense, where he gloved an exceptional 1.2 dWAR for the Dodgers in 2012. This makes him more of a bench option than a starter on a World Series-contending team.

With Cruz slated to start at third base in 2013, one can make the argument that the Dodgers haven’t had a consistently top-notch third baseman since 2004, when Adrian Beltre manned the hot corner.

So that begs the question, “Why not try to re-acquire Adrian Beltre?”

Beltre has consistently been one of the best offensive/defensive third basemen in baseball since making his debut as 20 year-old in 1999. The Rangers happily signed the Dominican-native to a five-year, $80 million before the 2011 season, and have enjoyed his good play over the past two seasons, where he has posted a 5.6 WAR and 6.7 WAR, respectively.

So if Beltre is such a great asset at third base, why would the Rangers trade him? It’s a fair question.

Luckily for the Rangers, they have another “complete” option at third base in Mike Olt.

With the loss of Josh Hamilton, the Rangers once powerful outfield is looking pretty thin these days.

Perhaps the Dodgers dangle Andre Ethier and Chad Billingsley in exchange for Beltre.

Clearing Beltre could open third base for Olt, and give the Rangers an outfield of Ethier, David Murphy/Leonys Martin, and Nelson Cruz. Also, Billingsley would give the Rangers a nice rotation option over Martin Perez and Colby Lewis (assuming he is still too injured to pitch).

There is no doubt that the Los Angeles Dodgers will be a team to beat in 2013, but even with such a good team on paper, it’s difficult to guarantee a World Series in December.

But given the Dodgers incredible volume of spending, it wouldn’t be too surprising to see the team spend a few more bucks on additional pre-season improvements to make their chance in October-aspirations that much more attainable.