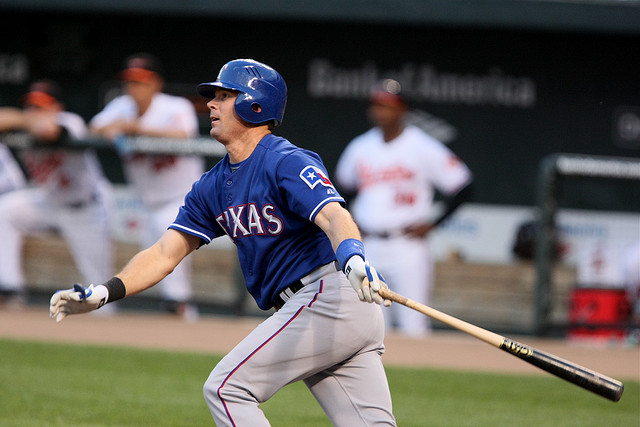 Young has spent his entire career with the Rangers

The Rangers waited patiently for an answer from Michael Young about waiving his no-trade clause, that would end his 12-year stay in Texas, and send him to Philadelphia.

Young who hit .277/.312/.370 with eight home runs, 67 RBI has waived his no-trade rights and is expected to take over as the Phillies’ starting third baseman in 2013. The Phillies will send reliever Josh Lindblom and prospect right-hander Lisalverto Bonilla to Texas.

Lindblom went 3-5 with a 3.55 ERA and 1.35 WHIP, while recording 22 hold and striking out 70 in 71 innings of work in 2012. Earlier this week the Phillies acquired Ben Revere from the Twins for Vance Worley and pitching prospect Trevor May.

He was expected to get some form of compensation for waiving his full no-trade clause, and will receive $1.2 million in additional benefits, in the form of state tax difference.

Young, a seven time All-Star, has spent his entire career with the Rangers.

The two teams were actively engaged in talks throughout this week’s Winter Meetings, and is just one of several conversations the Rangers were rumored to be involved in.

The trade may help Ranger’s efforts free-agent  right-hander Zack Greinke. The Rangers may absorb in $10 million salary to make a deal, but would still save about $5 million.

It’s  unclear whether the team will bring back outfielder Josh Hamilton, but are working aggressively towards signing Greinke.

With the deal complete the Rangers will likely renew talks with the Arizona Diamondbacks about Upton.

The Phillies get one of baseball’s most consistent players and a  solid clubhouse presence in Young, and more than anything the Rangers are lined up to make a legitimate run at Greinke and Upton.

The signing of Greinke will likely bring about a flurry of activity with the other free agents still on the market, including Nick Swisher, Michale Bourn, Ryan Dempster, and Cody Ross, just to name a few.