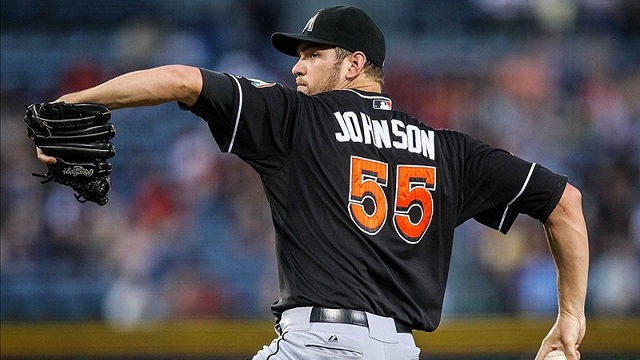 Reyes, Johnson and Buehrle head to Toronto as part of a mega-deal with the Marlins

The Miami Marlins continue their effort to bring AAA baseball to South Florida. Less than a year ago the team committed nearly $200 million to player contracts, in what could be interpreted as an effort to stir interest in a new publicly funded stadium.

With the stadium in place the Marlins and the buzz long gone the Marlins began purging big salaried players 2 1/2 months into the 2012 season.

Today the team announced that it was sending $106 million shortstop Jose Reyes, staff ace Josh Johnson and $58 million starter Mark Buehrle to the Toronto Blue Jays as the key pieces in a blockbuster trade.

The deal will not be official until sometime on Wednesday, according to sources. “Just about any (Marlins) player making money is going to Toronto,” a source told ESPN.

This deal rivals the blockbuster trade that was made between the Los Angeles Dodgers and the Boston Red Sox earlier this summer.

The Marlins have now dumped $236 million in future salaries since July. Buehrle made $6 million last season and is due $52 million the last three years of the deal. Reyes’ $106 million contract is heavily back-loaded  and he’s due to earn $96 million over the final five years of his deal.

Earlier this summer the Marlins traded Hanley Ramirez and Randy Choate to the Los Angeles Dodgers in in return for RHPs Nathan Eovaldi and Scott McGough.  The team traded Omar Infante and Anibal Sanchez to the Tigers for prospects Jacob Turner, Rob Brantley and Brian Flynn.

Closer Heath Bell, given a three-year, $27 million deal before 2012, was traded to the Arizona Diamondbacks in a three-way deal with $18 million left on his contract.

Ozzie Guillen was signed to a four-year, $10 million contract last winter , was fired late last month  and still has three years and $7.5 million left on his deal, likely isn’t losing any sleep with this latest round of salary dumps.

If it’s any consolation for Marlins fans, if they have any left, new manager Mike Redmond worked the past two years managing Class A teams in the Toronto Blue Jays system and should be very familiar with most of the players involved in this deal.

Giancarlo Stanton summarized his feelings and probably the feelings of Marlins fans via Twitter. Alright, I’m pissed off!!! Plain & Simple