Lincecum to Start Game 4 – In Bochy We Trust 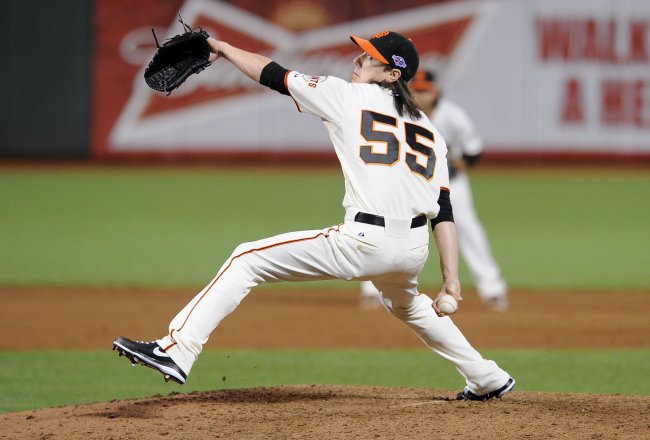 Manager Bruce Bochy has put his faith in Tim Lincecum

If you are searching for someone to solve America’s debt crisis or deal with a crisis in the Middle East, odds are you won’t be calling Bruce Bochy.

But if you want someone to handle a PITCHER in crisis, look no further than the San Francisco Giants manager, Bruce Bochy.

As a former catcher, Bochy already knew the temperament and intricacies of a major league pitcher. More importantly, he knew the difference between a pitcher having an off day, an off month, an off season and an finished career.

At no time in his tenure with the Giants have these decisions ever been brought to the forefront to such an extent, as with his handling of Tim Lincecum. Fresh off signing a two-year deal to remain in San Francisco, the bar for Lincecum’s performance was set to “high,” as it always is.

But sometimes, things just don’t work out as planned.

The season ends with the Giants winning the NL West by 8 games over the L.A. Dodgers. The Giants had FIVE pitchers winning more than 10 games. The entire staff was in double-digits, as expected. What wasn’t expected is that Lincecum would be the so-called “weak link” in the chain.

It got so bad, that during an incredibly unscientific poll held by CSNBAYAREA preceding a game, 80 percent of fans said that Lincecum should be left off the playoff roster in favor of Barry Zito (14-8). The Giants had won the previous dozen or so games in which Zito started, and evidently fans were willing to give up on a franchise pitcher for a pitcher in the sixth year of a seven-year huge contract and has underperformed in each of them until this season.

Knowing Lincecum is a “big time” player, it wasn’t hard for Bochy to put him on the roster for the playoffs. Lincecum had performed miraculously during the 2010 World Series run, so Bochy needed to see if it would be “Let Timmy Smoke” Lincecum, or “Big Time Timmy Jim” Lincecum. Immediately put to work in relief during the series against the Cincinnati Reds, Lincecum was nearly flawless. All his pitches were working, and Bochy knew he was on his way back to form.

After an unforgettable series sweep in Cincy, Lincecum was not named a starter for the NLCS against the St. Louis Cardinals. In Game One, Lincecum was brought in to try and keep the game close. And he did, pitching two scoreless innings. There was no doubt in Bochy’s mind …

Down 2-1 in the series, Bochy has put his faith in Lincecum to have a strong outing and get the series back to even. If the Giants lose, they are down 3-1 with another game to play in St. Louis. We learned in the series against the Reds that nothing is impossible, but it would be highly improbable for the Giants to pull another miracle out of a hat – or glove, as the case may be.

In just a few hours, we will see if Bochy has made yet another great move.

In Bochy, We Trust

PAC Protocol Trading Up 0.8% This Week