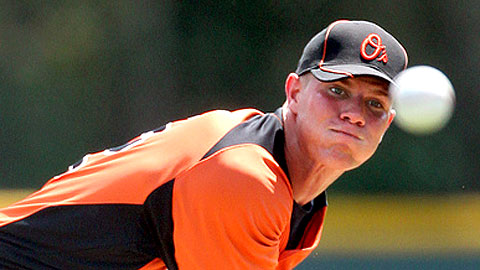 To bolster a bullpen weary after Tuesday night’s 18-inning marathon win over Seattle, the Baltimore Orioles have called up 19-year-old right-hander Dylan Bundy, who is currently the second-best prospect in baseball, according to MLB.com.

Bundy, who was the fourth overall pick in the 2011 draft, was 9-3 with a 2.08 ERA as a starting pitcher at three levels in the Orioles farm system, ending with Double-A Bowie. He has pitched in the fall instructional league since the minor league season ended.

When he appears in a game, Bundy will become the first Baltimore pitcher to make his Major League debut before the age of 20 since Mike Adamson in 1967. Adamson, who was also 19 at the time, was the first overall pick in the 1967 draft but was just 0-4 with a 7.46 ERA over 11 games in parts of three Major League seasons.

The Orioles expect much more for the long term out of Bundy, who will be eligible for the post-season roster if needed as a replacement for a player on the disabled list because he is on the 40-man roster.

As Baseball News Source reported earlier this summer, Bundy features a fast ball, a slider, a curve ball and a change-up in his arsenal, and he features excellent command. He is the second top prospect that the Orioles called up from Double-A Bowie this season. The first was Manny Machado, who has given the lineup a lift at third base.

The Orioles entered Wednesday’s action at 84-64 and tied with the New York Yankees atop the American League East standings.