CC Sabathia Fading Down the Stretch for the Yankees 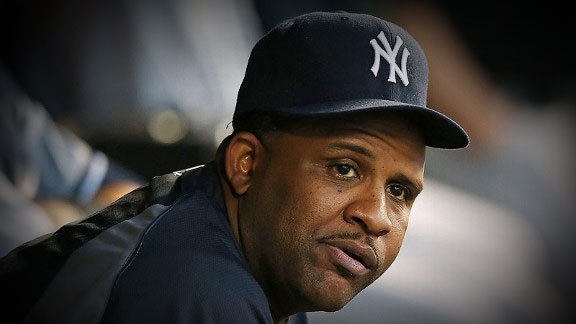 2012  has been a trying season Sabathia

So what’s the deal with CC Sabathia? If ever there was a case where wins and losses shouldn’t be counted for a pitcher, Sabathia’s 2012 campaign might be the best one. Though the Yankees’ “best” pitcher is a respectable 13-6,  he is one of the least dependable starters on the team right now.

It’s been a trying season for the big lefty; he’s been on the disabled list on two occasions, and after throwing quality starts in nine of his first 14 appearances (9-3 in that span) he has done it in just five of his past 11 starts since June 18th (4-3).

Sabathia failed to match a big game once again Friday night when David Price outdueled him in a 6-4 loss. Sabathia was OK, throwing 6.2 innings and giving up four earned runs, but he blew a 1-0 lead and left the game with his team trailing, 4-2. This was one of his better appearances of late, fresh off of five earned runs in 6.1 innings in Baltimore.

The Yankees have a ton of issues right now. They still don’t have consistent hitting, the bullpen is still not fully recovered from its recent struggles and Mark Teixeira is still not in the lineup. Ivan Nova and Andy Pettitte, though activated, have still not pitched in September.

There have been a ton of issues all year round, most of it health related, but New York has found a way to be in first place for 89 days in the hardest division in baseball. The Yankees also have the easiest schedule out of anyone in the AL fighting for a playoff spot down the stretch. Making the playoffs is a tangible goal and the division is still very much in reach, especially if the pixie dust wears off in Baltimore.

But if any of that is going to happen, if the Yankees are going to make any dent the rest of the way or into October, CC Sabathia needs to be the ace.

CC Sabathia will need to right his own ship.