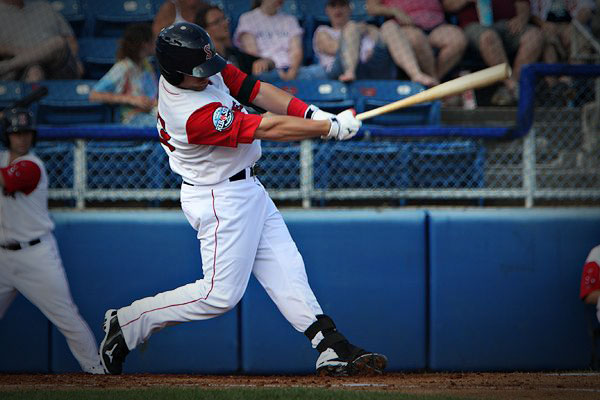 Commemorating its 20th anniversary, the Arizona Fall League will begin play on Oct. 9.

Each Major League organization is required to provide seven players. Triple-A and Double-A players are eligible, as long as they were placed on a Double-A roster no later than Aug. 15.

Each Major League club can send two advanced Single-A Class A players along with two “A exempt” players who are under contract by Aug. 15.

In many cases, the AFL gives teams a chance to get a prolonged look at prospects they are considering placing on the 40-man roster. Many players who compete in the AFL graduate to the majors within a year or two.

Baseball News Source is providing a glimpse of AFL participants by each division. Here is a look at players sent to the AFL from American League East clubs:

Jonathan Schoop – A 20-year-old second baseman from Curacao, Schoop was signed as a shortstop but moved to second base because of the presence of top prospect Manny Machado. Schoop hit .245 with 14 home runs and 56 RBI at Double-A Bowie this season.

L.J. Hoes – A third round pick out of nearby Washington D.C. in 2008, the 22-year-old Hoes hits for average and plays solid defense as a corner outfielder. He hit .287 with five home runs, 54 RBI and 20 stolen bases between Double-A Bowie and Triple-A Norfolk this season.

Clayton Schrader – A 10th round pick out of San Jacinto College in 2010, the 22-year-old Schrader is a potential closer who posted a 1.86 ERA with 68 strikeouts in 58 innings between advanced Single-A Frederick and Double-A Bowie this season.

Mike Belfiore – The 23-year-old left-hander was a supplemental first round pick of Arizona out of Boston College in 2010. He was 5-1 with a 2.71 ERAin 40 games between advanced Single-A and Double-A in 2012.

Brian Ward – The 26-year-old catcher hit .217 in 161 at-bats at Bowie in 2012 and has a .231 average over four minor league seasons. He is better known for his defensive abilities behind the plate.

Chris Petrini – The 25-year-old left-hander has battled injuries, including Tommy John surgery, but he posted a 2.49 ERA in 32 games between Frederick and Bowie this season.

Bryce Brentz – Rated as Boston’s fourth-best prospect by MLB.com, Brentz was a supplemental first round pick out of Middle Tennessee State in 2010. In 2012, the 23-year-old Brentz was an Eastern League All-Star and batted .298 with 17 home runs, 76 RBI and a .833 OPS at Double-A Portland before getting a cup of coffee at Triple-A Pawtucket and then playing a part in leading the PawSox to a three-game sweep of Charlotte (White Sox) in the Governor’s Cup, which is the International League’s championship series.

Chris Martin – The 26-year-old Martin is an interesting minor leaguer, having signed with the Red Sox out of an independent league last year. He was 3-6 with a 4.48 ERA in 23 games for the Sea Dogs this season.

Christian Vazquez – The 22-year-old Vazquez split time between Salem and Portland this season, and the Red Sox will need to place him on the 40-man roster if they want to protect him from December’s Rule 5 Draft.

Brock Huntzinger – The 24-year-old Huntzinger was converted into a reliever this year and logged a 4-5 record with a 3.93 ERA in 24 games at Portland. He appeared in the AFL last season with the Scottsdale Scorpions and, like Vazquez, will need to be placed on Boston’s 40-man roster or be exposed to the Rule 5 Draft this winter.

Dellin Betances – Ranked as a top 100 prospect by Baseball America for three consecutive years, the 24-year-old Betances has regressed the last two seasons because of command problems and injuries. He lugged a gaudy 6.44 ERA in 27 games between Trenton and Triple-A Scranton/Wilkes-Barre this season.

Dan Burawa – A 12th round pick out of St. John’s University in 2010, the 23-year-old right-hander did not pitch this season because of injuries.

Mark Montgomery – An 11th round pick out of Longwood University in 2011, the 22-year-old right-hander is considered a future late-inning reliever for the Yankees. He was 7-2 with a 1.54 ERA with 99 strikeouts in 46 games and 64.1 innings between Tampa and Double-A Trenton this season.

Zach Nuding – A 30th round pick out of Weatherford College in 2010, the 22-year-old right-hander has a mid-90s fast ball and recorded a 3.51 ERA between rookie league ball and advanced Single-A Tampa this season.

Austin Romine – A second round pick in 2007, the 23-year-old Romine has faded out of the Baseball America top 100 list. He hit .243 at three levels in the Yankees system this season.

David Adams – A third round pick out of the University of Virginia in 2008, the 25-year-old Adams is an infielder who hit .306 in 383 plate appearances at Double-A Trenton.

Slade Heathcott – A first round pick out of high school in 2009, the 21-year-old Heathcott still has yet to advance past Single-A. He did show promise this season with a .307 average at advanced Single-A Tampa.

Chris Rearick – A 41st round pick in 2010, the 24-year-old lefty had a 2.70 ERA in 49 games between advanced Single-A Charlotte and Double-A Montgomery this season

Kirby Yates – The 25-year-old right-hander posted a 2.65 ERA in 50 games at Montgomery this year.

Tim Beckham – Hit in May with a 50-game suspension related to his second violation of the Minor League Drug Prevention and Treatment Program for a drug of abuse, the first overall pick of the 2008 draft batted .256 in 285 at-bats this season at Triple-A Durham.

Hak-Ju Lee – A key part of the trade that sent Matt Garza to the Chicago Cubs, the 21-year-old Lee was Baseball America’s No. 44 prospect entering the 2012 season. Known for his exceptional defense, Lee hit .261 with 37 stolen bases at Double-A Montgomery in 2012.

Richie Shaffer – A first round pick out of Clemson University this summer, the 21-year-old Shaffer hit .308 with four home runs and 26 RBI in 117 at-bats at Hudson Valley in the New York-Penn League. He is a third baseman whose limited range might eventually lead to a move across the diamond to first base.

Kevin Kiermaier – A 31st round pick in 2010, the 22-year-old outfielder hit .260 between three minor league stops this season with most of the at-bats coming at advanced Single-A Charlotte (where he batted .260).

Jake Marisnick – A third round pick in 2009, the 21-year-old Marisnick is rated as Toronto’s second-best prospect by MLB.com and is highly regarded for his athleticism in the outfield. He batted .263 with a .800 OPS at advanced Single-A Dunedin before hitting .233 in 223 at-bats at Double-A New Hampshire.

Sam Dyson – Drafted three times – the last in the fourth round out of the University of South Carolina in 2010 – the 24-year-old Dyson spent most of 2012 at New Hampshire where he recorded a 2.38 ERA in 33 games.

Ryan Tepera – A 19th round pick out of Sam Houston State University in 2009, the 24-year-old right-hander was 8-6 with a 5.48 ERA in 21 starts between Dunedin and New Hampshire this season.

Kevin Pillar – A 32nd round pick in 2011, the 23-year-old outfielder had 51 stolen bases and a .323 average between low Single-A Lansing and Dunedin this season.