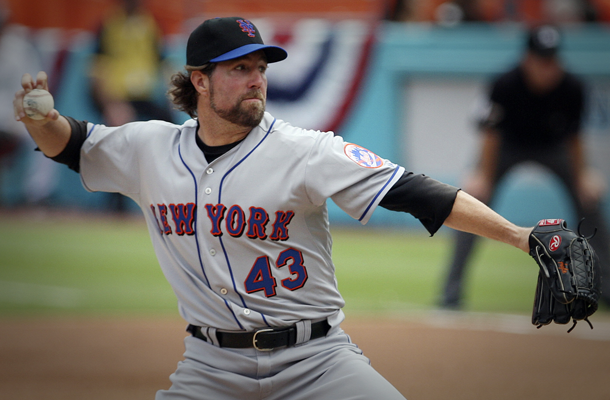 Phil Niekro and Joe Niekro, two of the most famous knuckleballers to pitch in the majors, finished as Cy Young Award runner-ups (as did Wilbur Wood), but no knuckleballer has ever won the top prize. That could change in 2012 with R.A. Dickey, the New York Mets right-hander who has an 18-4 record and a 2.64 ERA.

Dickey’s stats are impressive across the board. He has five complete games, three shutouts, a 1.03 WHIP and a .221 batting average against. In 198 innings, he has allowed 158 hits with 195 strikeouts and just 45 walks, the latter of which is especially remarkable considering the unpredictable direction of the knuckler.

The 37-year-old Dickey, who appeared in his first All-Star Game this summer, is undoubtedly the preferred choice of fans outside of Cincinnati because of his extraordinary story.

A first round pick (19th overall) by the Texas Rangers out of the University of Tennessee in 1996, Dickey was a traditional pitcher who spent four full seasons in the minors before making his Major League debut in 2001 (posting a 6.75 ERA in four relief appearances with the Rangers. He returned to Triple-A Oklahoma City for the entire 2002 campaign and then was 9-8 with a 5.09 ERA for Texas in 2003.

Dickey’s fast ball velocity declined as he logged lackluster numbers for Texas in 2004 (6-7, 5.61 ERA) and 2005 (1-2, 6.67 ERA), splitting time between the majors and minors both years.  The Rangers told him that converting to the knuckler was his ticket to remaining in the majors, but the earlygoing of the transition was rough. In his first game as a knuckleballer in April 2006, he served up six home runs. Eventually, he started throwing the pitch harder, and now it baffles hitters at 80 m.p.h., which is about 10 to 15 m.p.h. harder than the knuckler that Tim Wakefield threw.

After that forgettable outing with the Rangers that saw him allow seven runs and eight hits (including the six home runs) in April 2006,  Dickey spent the remainder of that season at Triple-A Oklahoma City, where he was 9-8 with a 4.92 ERA. The Rangers released him at season’s end. Dickey signed with Milwaukee and spent 2007 at Triple-A Nashville (13-6, 3.72 ERA) before he spent 2008 between the Seattle Mariners and their Triple-A affiliate and 2009 between the Minnesota Twins and their Triple-A club.

Dickey signed with the Mets before the 2010 season and has found a long-term home. He was 11-9 with a 2.84 ERA in 2010 and followed that with a 8-13 record and a 3.28 ERA last season. Considering that he throws the knuckler, Dickey could have several seasons left in his arm even though he is 37.

The Mets have an easy decision this off-season when presented with the alternative of picking up Dickey’s $5 million option or exercising a $300,000 buyout. Whether Dickey joins the Niekro brothers and Wood as a Cy Young runner-up or wins the honor, there is no doubt that he has established himself as a reliable Major League starter, albeit in a different way than the Rangers envisioned back in 1996.