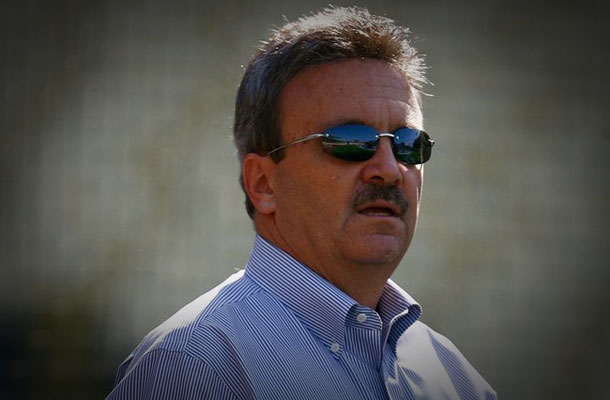 Seemingly operating on an unlimited budget, the Los Angeles Dodgers are evidently not content about the bounty of players they have acquired over the last month.

At 69-60 – and 2.5 games behind San Francisco in the National League West standings and also 2.5 games out in the wild card race – the Dodgers and GM Ned Colletti are searching for another starting pitcher, according to ESPN’s Buster Olney.

Olney speculated that the Dodgers could be interested in Miami left-hander Mark Buehrle, who signed a four-year, $58 million contract with the Marlins last off-season. The durable 33-year-old left-hander has eclipsed 200 innings in 11 previous seasons, and he is on pace to exceed that number this year as well. Buehrle is 12-11 with a 3.62 ERA in 26 starts and 166.2 innings for Miami.

The Dodgers, of course, made monumental news last weekend when they agreed to take on all but $11 million of the $272 million remaining on the contracts of Adrian Gonzalez, Josh Beckett, Carl Crawford and Nick Punto in a nine-player deal with Boston. The new ownership group in Los Angeles also signed off on trades for Joe Blanton, Brandon League, Hanley Ramirez, Randy Choate and Shane Victorino.

Even with Beckett, who allowed three runs over 5.2 innings at Colorado in a 10-0 Dodgers loss last night, the Los Angeles rotation is questionable beyond ace Clayton Kershaw. Right-hander Chad Billingsley departed early in last Friday’s start with right elbow inflammation. Chris Capuano, Aaron Harang, Blanton and Beckett are the remaining starters. Especially with Billingsley battling an elbow issue, the Dodgers need a top of the rotation arm instead of relying on Kershaw and a host of No. 5s.

Olney wrote that the Dodgers would take on Buehrle’s contract as long as they did not have to surrender top prospects.

Also according to Olney, the Red Sox have placed right-hander Daisuke Matsuzaka on revocable trade waivers. Because of his Japanese roots, Matsuzaka could interest the Dodgers. He allowed one unearned run and five hits over seven innings and earned a win in Boston’s victory over Kansas City on Monday.

It was Matsuzaka’s first appearance in a Major League game in two months. The right-hander has rehabbed from Tommy John surgery and has been hampered with other injuries this season.

Matsuzaka would provide depth, but not a proven top of the rotation arm. Buehrle seems like the most logical choice for the Dodgers since the Marlins appear interested in escaping some of the questionable contracts they signed last off-season and the new owners in Los Angeles have proven they are not bashful about spending money.