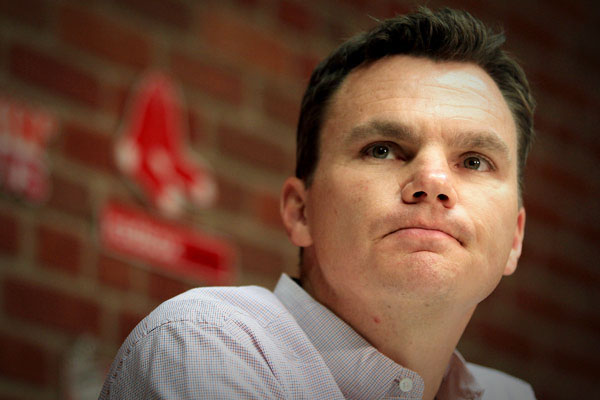 Cherington -“we are not who we want to be right now”

The reason that Cherington must feel like a little boy on Christmas morning is that the Dodgers agreed to take on approximately $260 million of the $272 million remaining on the contracts of Red Sox players who were shipped to Los Angeles.

Jeff Euston of Cot’s Baseball Contracts reported on Saturday that the Red Sox have $45.6 million in contract obligations for next season.

The trade represents a clean slate for the Red Sox and Cherington, who was an assistant general manager under Theo Epstein when Boston inked Gonzalez to a seven-year, $154 year deal after acquiring him from San Diego to top prospects Anthony Rizzo, Casey Kelly and Reymond Fuentes before the 2011 season. That same off-season, Epstein signed Crawford to a seven-year, $142 million deal.

The trade was needed for the underachieving Red Sox, which are 60-67 entering Sunday’s game at Fenway Park against Kansas City. Gonzalez, Beckett and Crawford were not producing numbers that were remotely in line with their salaries. Punto, who signed a two-year, $3 million deal with the Red Sox last off-season, is a utility player who had been surpassed by 26-year-old Pedro Ciriaco on the team’s active roster.

Though the Red Sox are not a post-season threat this season, they are not the Kansas City Royals, so they can reemerge as a World Series contender in 2013. Cherington has some talented core players to build around, including second baseman Dustin Pedroia and 23-year-old rookie third baseman Will Middlebrooks, who will miss the rest of the 2012 season with a broken wrist.

The Red Sox can spend big in the off-season if they desire, but they are not likely to take the free-wheeling free agent route they embarked upon after the 2010 season. Instead, it appears they will fill holes through trades and acquire difference-making young veterans.

When the off-season arrives, Cherington must decide if the team will pursue a long-term extension with center fielder Jacoby Ellsbury, who will be 29 in September. He can become a free agent after the 2013 season and is represented by Scott Boras, so retaining him could require a contract that is similar Crawford’s deal in years and dollars. The Red Sox have 22-year-old Jackie Bradley, a top prospect at Double-A Portland, who could replace Ellsbury in 2014.

Cherington must also address the status of David Ortiz, who will be 37 in November. Last off-season, Ortiz avoided arbitration and agreed to a one-year, $14.75 million deal. The Red Sox have balked at giving an aging designated hitter a multi-year deal, and considering that Ortiz has been hampered with an Achilles tendon injury, it is unlikely the team will do no more than offer him arbitration again.

Even with a rash of injuries that has seen 26 players land on the DL this season, the Red Sox are one of the most productive lineups in the majors. The front office insists that it will focus on bolstering the starting rotation this off-season. Jon Lester has pitched better in recent starts and represents a quality No. 3 caliber arm. Clay Buchholz has top of the rotation potential but he is best suited as a No. 2 or No. 3 starter. Fleix Doubront, a 24-year-old left-hander, and 26-year-old hard-throwing lefty Franklin Morales, are intriguing candidates for next year’s rotation. John Lackey, who has the lone remaining bad contract on the roster (he is signed through 2014 at $15.25 million a season), is expected to be fully recovered from Tommy John surgery by spring training. The Red Sox have rotation depth, but what they need is a bonafide ace.

Now that the bulky contracts of Gonzalez, Beckett and Crawford are gone, the Red Sox could pursue Tampa Bay’s James Shields, Los Angeles Angels’ Dan Haren or Chicago White Sox right-hander Jake Peavy if their respective teams decline their options. There is a possibility of trading for Cleveland’s Justin Masterson, White Sox righty Gavin Floyd and the biggest prize of all, Seattle ace Felix Hernandez.

The Red Sox are better equipped to offer a team young starting pitching with the acquisitions of Webster and De La Rosa from the Dodgers and the presence of top prospect Matt Barnes.

Zack Greinke, Ryan Dempster and Anibal Sanchez are starting pitchers who will be on the free agent market this off-season, but only Greinke is an ace-caliber arm and there are questions about his ability to thrive in a pressure-packed market like Boston.

The Red Sox will be on the lookout for scrappy Dirt Dawg-style players that reflect the style of Pedroia, according to one media outlet. They will look to acquire these players via trades and likely only use free agency for role players.

As the team learned from the winter that followed the 2010 season, even when you have a load of money, it’s important to spend it wisely or the cumbersome contracts can set your organization back.