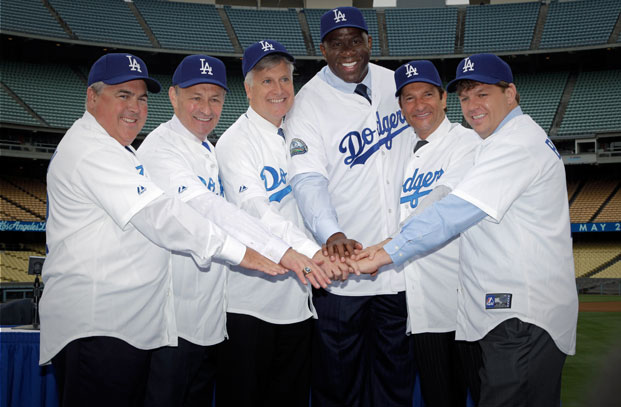 New Ownership Wants to Win it all in 2012

Funded by the deep pockets of their new ownership, the Los Angeles Dodgers did not wait until the off-season to upgrade their roster. The ownership group is showing that it wants to win it all in 2012.

Emphasizing their “win at all costs” approach for this season, the Dodgers will pay all but $10 million to $12 million of the $272 million that remains on the contracts of the four players, according to media reports.

Another indicator that the new owners are aiming for a World Series parade this fall? Crawford recently underwent Tommy John surgery and, depending on his rehab progress, will likely not be Major League ready until anywhere from next May to July.

Whether the Dodgers can make the playoffs and even reach the World Series remains to be seen, yet there is no question that the team is much better today than it was before the flurry of trades.

The Dodgers – which are 68-58, three games behind San Francisco in the National League West and 1.5 games behind St. Louis for the second wild card spot – can now author a lineup that features Victorino, Ramirez, Gonzalez, Kemp and Ethier.

The rotation features Clayton Kershaw, who is 11-7 with a 2.87 ERA and 1.00 WHIP. The Dodgers are third in the majors in starters’ ERA at 3.48, but beyond Kershaw, the club’s starting pitching features Chad Billingsley, who left Friday’s start with right elbow inflammation and the injury prone arms of Chris Capuano and Joe Blanton. Veteran Aaron Harang is having a productive season at 9-7 with a 3.65 ERA.

The Dodgers are hopeful that Beckett will flourish in a new uniform. He is the midst of the worst season in his 12-year Major League career with a 5-11 record, a 5.23 ERA, a 1.33 WHIP and a .266 batting average against.

Even with all of the additions, the Dodgers are not a lock to reach the playoffs. They are a half-game ahead of the Pittsburgh Pirates and trail Atlanta and St. Louis in the wild card hunt. Anything short of a World Series appearance will be a disappointment for the organization after adding so much payroll.