Times are changing for the San Diego Padres. A new ownership group that features sons and nephews of a former owner with a championship pedigree has taken over, key veterans Carlos Quentin and Huston Street were signed to extensions, the farm system is poised to harvest some impressive young talent and if media reports are accurate, the franchise is ready to spend money in the off-season.

Last week, it was announced that Major League Baseball owners approved the sale of the Padres for around $800 million to a group that includes pro golfer Phil Mickelson. Though not as flashy as Magic Johnson is for the Los Angeles Dodgers, Mickelson is the celebrity name attached to the ownership group.

For baseball matters – and winning purposes – members of the new ownership group who Padres fans are excited about have the last name of O’Malley.

Baseball history enthusiasts are keenly aware of the O’Malley family’s place in the game’s rich heritage. Before the 1958 season, the late Walter O’Malley bought the Brooklyn Dodgers in 1950 and moved them to Los Angeles. Peter O’Malley succeeded his father. Under the O’Malley family, the Dodgers captured six World Series championships and 13 National League titles before they were sold in 1998.

An expansion franchise in 1969, the Padres have reached World Series, losing to the Tigers in 1984 and the Yankees in 1998. 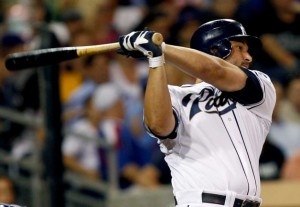 Even with their current record of 55-70 and the certainty of another losing season, San Diego is brimming with optimism. Promising young position players like catcher Yasmani Grandal, first baseman Yonder Alonso and center fielder Cameron Maybin dot the lineup.

Top prospects like third baseman Jedd Gyorko, outfielder Rymer Liriano, second baseman Cory Spangenberg and starting pitcher Casey Kelly are getting closer to the majors. And the Padres are demonstrating that they might be ready to shed their traditional penny-pinching ways.

Though they are unlikely to mimic the Miami Marlins of last off-season, the Padres showed a new direction when, instead of dealing key veterans at the non-waiver trade deadline, they locked up Quentin and Street.

Street, a 29-year-old closer who is currently on the 15-day disabled list, inked a two-year, $14 million extension with a $7 million team option in 2015. Street has a 0.75 ERA and 21 saves in as many opportunities over 37 games and 36 innings this season. He has 45 strikeouts and has surrendered just 11 hits, holding batters to a .o94 average.

This off-season, the Padres will have between $25 million to $30 million available for free agents and/or trade acquisitions, according to San Diego sports radio XX1090’s Jordan Carruth. Carruth mentioned that the team will target outfielders. Michael Bourn, Josh Hamilton, Torii Hunter and B.J. Upton are among the high profile free agent outfielders who will be available.

Though the Padres rotation could use some help, with soon-to-be 29-year-old left-hander Clayton Richard and 29-year-old right-hander Edinson Volquez as the only reliable arms who would will likely fit in the club’s long-term plans, San Diego is starved for offense, especially since it plays 81 games a year in spacious Petco Park.

Quentin is a run producer when healthy, but the 25-year-old Maybin might not be the center fielder of the future. Once one of the top prospects in the game, Maybin is superb on defense, but he has a career .248 average and .685 OPS over parts of  six Major League seasons. He has a .230 average and 22 stolen bases this year.

Help is on the way at catcher, third base and second base.

After batting .335 with a .963 OPS at Triple-A Tucson, the 23-year-old Grandal was called up to San Diego, where he has a .270 average and five home runs and 16 RBI in 89 at-bats. A first round pick (12th overall) in the 2010 draft, Grandal is a switch-hitter with a strong arm behind the plate. The Cuba native is ranked as the third-best catching prospect in baseball by MLB.com.

San Diego currently has the equally heralded Alonso at first base and young veteran Chase Headley at third base. The Padres might deal Headley in the off-season, or move him to the outfield, where he has played before. Gyorko has a chance to become the starting third baseman in San Diego’s 2013 opening day lineup.

This season, at advanced Single-A Lake Elsinore, the left-handed hitter who is know for generating a high average and on-based percentage has a .276 average, 26 steals and seven triples in 340 at-bats.

Headley, who is 28 and remains under team control for the next few seasons, could remain in San Diego if the new ownership group does increase the payroll. He might also be traded for starting pitching or an outfielder since Alonso is at first and Gyorko is ready to jump to the majors.

If the Padres spend their money wisely on free agent signings, and surround the core veterans (Quentin and Street) and high ceiling young players and prospects with difference makers, they could emerge as contenders in 2013 or 2014.

The third generation of O’Malleys  is likely to devote their knowledge and resources to bringing a first World Series title to San Diego, and another championship to the family tree.