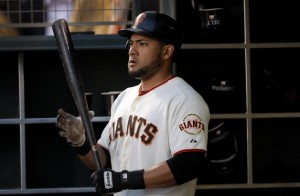 “My positive test was the result of my use of a substance I should not have used,”Cabrera said in a statement issued by the MLB Players Association.

In the midst of a breakout season, Melky Cabrera was racing towards a potential National League Most Valuable Player award and guiding the San Francisco Giants to another post-season berth. Now, Cabrera’s MVP hopes are dashed, and his team’s chances for a NL West title are in question with today’s news that he has been suspended for 50 games after testing positive for a performance-enhancing drug.

According to Major League Baseball, Cabrera tested positive for testosterone. The Giants are 64-53 and in a tie with the Los Angeles Dodgers atop the NL West. Andrew Baggarly of CNSBayArea.com reported that Cabrera will miss the rest of the regular season because of the suspension, but he will be eligible to play in the fifth game in the playoffs.

Cabrera will reportedly not appeal the suspension.

“My positive test was the result of my use of a substance I should not have used,”Cabrera said in a statement issued by the MLB Players Association. “I accept my suspension under the Joint Drug Program and I will try to move on with my life. I am deeply sorry for my mistake and I apologize to my teammates, to the San Francisco Giants organization and to the fans for letting them down.”

He can proficiently play all three outfield spots and will be part of a free agent center field class that might also include B.J. Upton and Shane Victorino if the Giants do not sign him to an extension.

In four full seasons with the Yankees and one year in Atlanta, the switch-hitting Cabrera established himself as a useful and versatile outfielder. Then, last year, he emerged as a run producer when he hit .305 with 18 home runs, 87 RBI, 20 stolen bases and a .809 OPS in Kansas City.

Last off-season, Cabrera was involved in what is one of the most lopsided trades in recent years when he was sent to San Francisco for left-handed pitchers Jonathan Sanchez and Ryan Verdugo.

It is uncertain whether Cabrera’s infraction influences the Giants’ decision to bring him back or let him depart via free agency. According to CBSSports.com’s Jon Heyman, the Giants and Cabrera will resume talks about an extension when in the off-season arrives. Though an official offer was not initiated, Heyman reports, San Francisco “is believed to have suggested a three-year deal along the lines of Carlos Quentin‘s new $27-million, three-year contract.”

Cabrera has said that he welcomes a return to the Giants, but the suspension will likely cost him millions of dollars.

Without Cabrera, the Giants outfield consists of the recently acquired Hunter Pence, Angel Pagan and Gregor Blanco. They could choose to call up Francisco Peguero from Triple-A Fresno or Gary Brown from Double-A Richmond. According to MLB.com, Peguero is the No. 2 prospect in the Giants organization and No. 80 overall while Brown is the team’s top prospect and No. 37 overall.