The current roster in Chicago is most likely to be blown up before this 2012 season is over.  Veterans such as Ryan Dempster, Alfonso Soriano, Matt Garza, Carlos Marmol and David DeJesus are all likely to be traded as new management begin to mold the future of the franchise.

In the past offseason, Theo Epstein was hired as president of baseball operations and Jed Hoyer was hired as executive-vice-president and general manager. 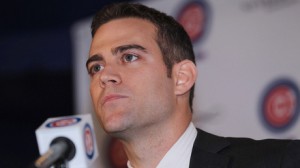 As Epstein and Hoyer have now had time to evaluate the Cubs major league roster and minor league system, they can now make strategical baseball moves based on philosophy.

The Cubs seem to believe they have a core group of major league or close to major league ready talent to build around for years to come, but the biggest and most talented names will not arrive for a couple years.

It has been stated numerous times by management that anyone on the major league roster could be moved this season with the exception of shortstop Starlin Castro, first baseman Anthony Rizzo and to a lesser extent, pitcher Jeff Smardzjda.

Although there is not much to work with at the major league level, it is logical to suggest that Epstein and Hoyer would look to keep a core group of players through the developmental years of their brightest stars in the minors.

Starlin Castro and Anthony Rizzo are two young, superstar-potential players that seem to be locks for management to build around.

Darwin Barney, Geovany Soto and Jeff Samardzija would all be reasonable players to keep around as well, as they are young and seem to have some upside still.

While the Cubs clearly are not competitive this season and most likely wont be next season either, there is help on the way.

Anthony Rizzo, 1B- Acquired from the Padres this past offseason, Rizzo came to the Cubs organization already familiar with new GM Jed Hoyer.  Hoyer was assistant GM in Boston, where Rizzo was originally drafted, to only be traded to the Padres in the Adrian Gonzalez deal, where Hoyer was then the GM.  So it would only make sense for Hoyer to then acquire Rizzo in another deal, this time to bring him to Chicago. 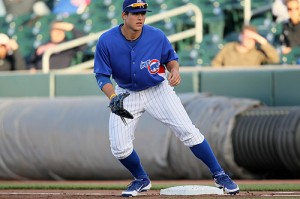 Rizzo started the season in AAA Iowa and absolutely torched the competition, batting .342 with 23 home runs and 62 rbi through 70 games.  On June 26th, Rizzo made his Cubs debut and has not looked back since, hitting .365 with four home runs and nine rbi through 13 games.  Rizzo looks to be a major part of the Cubs roster moving forward.

Josh Vitters, 3B-  Drafted third overall in the 2007 draft, Vitters progressed through the Cubs minor league system according to plan.  Vitters, 21, has batted .304 with 13 home runs and 50 rbi at AAA Iowa.  It has been reported in the Chicago Tribune that Vitters is still some time away from joining the big-league club due to his errors at third base and his lack of plate patience.

Welington Castillo, C- Castillo, 25, is considered to be the best defensive catcher in the Cubs system and has made strides towards being a competent hitter in the big leagues.  Through 32 games in AAA, Castillo has four home runs and 16 rbi to go along with a .276 average.

Brett Jackson, CF-  Jackson, the former first round pick from 2009 has the look of a solid, all-around outfielder for the Cubs eventually.  Jackson, 23, is now in AAA batting .259 with 12 home runs, 38 rbi and 21 stolen bases.  Along with Vitters and Castillo, Jackson will likely be in the show sooner rather than later.

Jackson, Castillo and Vitters all have the potential to be September call-ups this season.

Jorge Soler, OF- The biggest move that Epstein and Hoyer have made since taking over is the signing of Soler.  Soler, 20, is a Cuban defector that has five-tool potential, with his biggest asset being power.

The 6’3″, 225 pound slugger signed a nine year, $30 million contract with the Cubs.  It will most likely be a couple of years before Soler is ready to make an impact at the major league level, but could be a great cornerstone for a future winner.

Albert Almora, OF- Epstein and Hoyer did not stop with Soler, as they were intent on signing the number six overall pick from 2012 as well.  Almora, the Cubs first round pick from 2012 officially has signed with the club and looks to be a nice building block for the future as well.

Almora, 18, signed a $3.9 million bonus to be with the Cubs.  Almora and Soler look to be two big-time prospects that the Cubs hope move quickly through the system to join the likes of Rizzo, Jackson, Castro and others to form a potent lineup.

Coming into the 2012 season, the Cubs minor league system was ranked 20th by Keith Law, but with the additions of Soler, Almora and Duane Underwood, the Cubs look to be heading in the right direction.