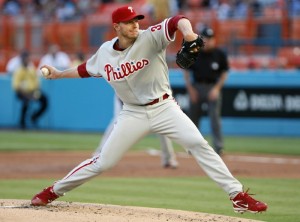 Roy Halladay will make a minor league rehab start Thursday in Clearwater. Halladay has been sidelined with a strained right lat muscle since late May.

If he gets through the start without any issues, how they should rejoin the Phillies rotation next Tuesday against the Dodgers.

The Phillies are in last place in the National League East 14 games behind the surprising Washington Nationals.

If the Phillies can’t turn around their season quickly after the all star break, you can look for them to be very active in the trade market, with the trade deadline approaching July 31