Ryan Howard May Be Back For Phillies This Weekend 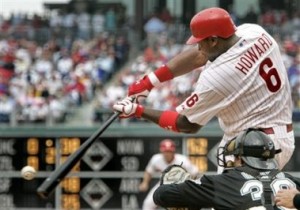 Offensively, the Philadelphia Phillies may be on the verge of getting some help.  All-Star first baseman Ryan Howard may be back in the lineup very soon . Howard is expected to play nine innings at first base at Triple-A Lehigh Valley tonight.

Howard has been swinging the bat very well in his rehab, 471 (8-for-17) with a home run, two doubles with nine RBIs. he has walked three times and struck out three times.

Howard is said to be chomping at the bit to get back to Philadelphia. General manager Ruben Amaro Jr. said any final decisions will be made after talking to doctors in evaluating him.

“I think he thinks he’s ready,” Amaro said. “But we’ll see. We’re still talking with the docs and have people evaluating him every day.” Howard has yet to play back-to-back games in his rehab, and it is possible that could happen today and Friday.

The Phillies are 12 games back in the National League East, 3-7 in their last 10 games and Howard would provide a big boost to their offense.

Update – As we expected, Howard was activated for tonight’s game form the DL  Hector Luna was optioned to Triple-A to make room on the roster for Howard.