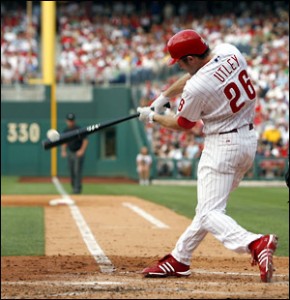 The Philadelphia Phillies have activated second baseman Chase Utley from the disabled list, and Utley is expected to make his 2012 season debut Wednesday night against the Pittsburgh Pirates. The Phillies optioned infielder Michael Martinez to the Triple-A Lehigh Valley IronPigs to make room for Utley on the roster.

Utley hit just .189 (7-for-37) with two homers during his rehab assignment. the 33-year-old UtleyI struggled with injuries, specifically chronic knee injuries since the 2011 season.

While the Phillies can’t expect Utley to regain his All-Star form, Utley should provide a boost to a struggling Phillies team. The Phillies are currently in fourth place in the National League East, a division they have won the past five seasons.

Injuries with two superstars Roy Halladay and Ryan Howard have contributed to the Phillies dismal season. The Phillies hope to have all three of their stars back to help them in their pursuit of a sixth straight National League Eastern division championship.

UPDATE – Chase Utley was 3 for 5 with a home run, and a run scored  in his first game back