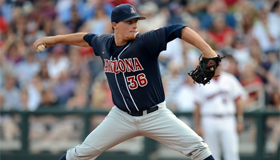 South Carolina pitcher Michael Roth was equally impressive, giving up the one run in 6 2/3 innings of work.

Arizona scored early when Joseph Maggi hit a fastball  the other way just inside the third-base bag for a double. Riley Moore then sacrificed Maggi to third with a bunt. Trent Gilbert then hit a ground ball to second base that scored Maggi.

Ferris made the lead stand up with solid pitching and a nasty curve ball until the bottom of the seventh when the Gamecocks Christian Walker scored on a ground ball to second base to tie the game.

The game remained tied until the top of ninth. Robert Refsnyder lead led off the inning with a base hit. Then Seth Mejias-Brean  sacrificed him to second.  the next batter Bobby Brown was walked intentionally and  Brandon Dixon delivered a run-scoring double and the Wildcats went up 2-1.

Trent Gilbert then came up with two runners in scoring position and delivered a single to right to make it  4-1.

The Gamecocks tried to rally in the bottom of the ninth loading the bases with a base hit and two walks, but Mathew Troupe settle down and got the final three outs and the Wildcats were champions. South Carolina was looking to become a three-peat champion of the College World Series, after having won the title in 2010 and 2011.