Giant Trouble – What Is Wrong With Tim Lincecum

Baseball, as in life, IS filled with peaks and valleys.

For hitters, slumps are inevitable. The great hitters of our time have been through them and hit their way out of them. Star pitchers. at one time or another, will hand the ball off to their manager for a pitching change after giving up a “crooked number” in an inning during a bad outing. Those star pitchers will pitch their way out of a bad start and return to form.

In San Francisco, the only time hitting is mentioned is when news media and blogs state the obvious: the Giants don’t hit. But when PITCHING is mentioned, America’s focus shifts to the left coast and Giants. From one through five, the Giants are either the best – or at worst – third best staff in the league.

Matt Cain has pitched a perfect game and is an All-Star LOCK this year, possibly starting. Madison Bumgarner is 8-4 with an ERA under 3.00. Everyone knows the “feel good”story of Ryan Vogelsong, and he’s continuing that story with a 6-2 record (despite no run support) and a 2.29 ERA. Heck, even Barry Zito has a winning record and it’s the middle of June! What a great staff. But something’s missing. Something like the Giants’ Number One. 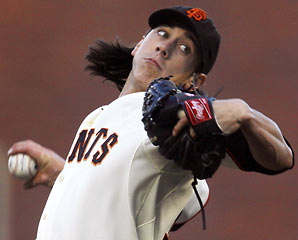 Tim Lincecum was destined to be a mainstay in the Giants’ organization from the day he signed with the club. He had the San Francisco trifecta: The hair, the laid-back attitude and the ability to shower when he “felt it.” And he delivered. From 2007 through 2011, Lincecum was 69-41, had an ERA under 3.00, won back-to-back Cy Young Awards and had the city of San Francisco bowing before him each time he held a baseball.

(WARNING: GIANTS FANS OR THOSE WITH WEAK HEARTS, PLEASE LOOK AWAY)

So what exactly is wrong with The Freak?

No one has ANY idea what is wrong. Dave Righetti is one of the best pitching coaches in baseball and he has no idea. Bruce Bochy and the Giants’ brass, it was reported, are toying with the idea of putting him in the bullpen. In this era of baseball, many pitchers have been put on the DL due to “tired arms,” but Lincecum has not given any indication this is the case. How does a team fix something that has never been broken?

The answer may have shown its face during the off-season. Lincecum has always maintained he doesn’t mind playing on a year-to-year contract, but signed with the Giants for this year and next for approximately $23 million. After signing Zito to one of the worst contracts in baseball HISTORY, the Giants have shown they do not want to sign anyone long-term and end up on the losing end of the proposition … again. Then something odd happened.

Just prior to Opening Day, Cain gets signed for six years and $127 million. Following that, MadBum signs a six year deal worth $36 million – and he’s only been in the league for two years. That makes two pitchers signing long-term deals with Lincecum not getting beyond two years. Even the argument that the Giants don’t like to dole out cash like the Yankees did to get C.C. Sabathia goes out the window because Cainer is getting more than $20 mil a season.

If there is nothing physically wrong with Lincecum and he’s still operating with that quirky Seattle-type brain, one can only assume he is suffering from a newly-made-up chronic disorder called Contract Envy. Symptoms include pretending to be happy for others’ contracts while secretly showing disdain for them. But there is a cure. And it’s a cure Giants fans are not going to like.

It’s a one-way ticket out of town … for whatever the Giants can get for him.